The first Afro-american woman director in Hollywood has died

Winston-Salem, North Carolina: Civil rights activist, author, poet, dancer, songwriter, singer, playwright, performer, director, stage and screen producer, Maya Angelou was everything at once. She became famous for her first book, her autobiography, I Know Why the Caged Bird Sings. She was considered herself as a poet and a playwright, but she was best known for her seven autobiographies, especially this one.

Although her poetry has also been successful particularly And Still I Rise her third volume of poetry. And Still I Rise was published in 1978, during one of the most productive periods in Angelou's career.

She was seen primarily as a poet and secondarily as an autobiographer second, but  critics  consider her autobiographies more important than her poetry.

Maya Angelou was born Marguerite Johnson in St. Louis, Missouri, on April 4, 1928. She grew up in St. Louis and Stamps, Arkansas. In 1959, Maya Angelou became the northern coordinator for the Southern Christian Leadership Conference.

Maya Angelou's poetry was expressing emotions of ordinary people, the hopes they share for a better world :

“We, this people, on a small and lonely planet

Past aloof stars, across the way of indifferent suns
To a destination where all signs tell us
It is possible and imperative that we learn
A brave and startling truth”.

In 1993, at President Bill Clinton's first inauguration, she read her poem On the Pulse of Morning.

“You may have the courage
To look up and out upon me, the
Rock, the River, the Tree, your country”.

Later, she answered no to the question whether the Clinton administration had fulfilled the hopes raised by the poem. “No. But fortunately there is that point about hope: it is never satisfied.  It is met, sometimes, but never satisfied.  If it was satisfied, you’d be hopeless”.

She had several lives: calypso singer, dancer, unwed mother at 17, film director, and further. She also worked for Martin Luther King in New York, she had followed  the South African activist Vusumzi Make to Egypt and she rubbed Malcolm X in Ghana.

She had served as Reynolds Professor of American Studies at Wake Forest University since 1982. Her books are in the school curriculum, to the chagrin of conservatives.

Maya showed her acting skills in the miniseries Roots where she played Yaisa, Kounta Kinte grandmother. Kouta returning from his initiation period and asserted his masculine domination except his grandmother, of course. She was alreadya “phenomenal woman”. In 1998, she directed the film Down in the Delta about a drug-wrecked woman who returns to the home of her ancestors in the Mississippi Delta.


You may write me down in history
With your bitter, twisted lies,
You may tread me in the very dirt
But still, like dust, I'll rise.

Does my sassiness upset you?
Why are you beset with gloom?
'Cause I walk like I've got oil wells
Pumping in my living room.

Did you want to see me broken?
Bowed head and lowered eyes?
Shoulders falling down like teardrops.
Weakened by my soulful cries.

Does my haughtiness offend you?
Don't you take it awful hard
'Cause I laugh like I've got gold mines
Diggin' in my own back yard.

You may kill me with your hatefulness,
But still, like air, I'll rise.

Does my sexiness upset you?
Does it come as a surprise
That I dance like I've got diamonds
At the meeting of my thighs?

Out of the huts of history's shame
I rise
Up from a past that's rooted in pain
I rise
I'm a black ocean, leaping and wide,
Welling and swelling I bear in the tide.
Leaving behind nights of terror and fear
I rise
Into a daybreak that's wondrously clear
I rise
Bringing the gifts that my ancestors gave,
I am the dream an the  hope of the slave.
I rise
I rise
I rise.

you speak english ! dapré'w Henri Taillefond, multilingual here and beyond

We are sad to announce the death of Tony Valmond of Grand Bay (Dominica) who resided in Guadeloupe he was the lead vocal of the musical group Liquid Ice. Rip. 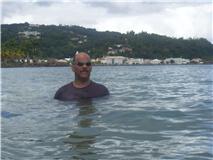